This just in from those promoting the Bull Street development:

“Today we break ground; In April of 2016, we’ll play ball!”
This morning, Columbia came together to ceremoniously break ground on Spirit Communications Park.  The park will be a state-of-the-art multi-use sports and entertainment venue home to an affiliated Minor League Baseball team in April, 2016. 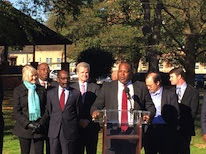 “This is a milestone day for our entire city,” Mayor Benjamin said. “It’s taken hard work by many to make this possible, and more hard work is still in store, but our vision for a more vibrant Columbia is coming closer and closer to fruition. The countdown is now on to Opening Day in 2016.”
“It’s exciting to think about how Spirit Communications Park will add to what is already one of America’s great cities,” said Freier, who was at a similar groundbreaking for Parkview Field in Fort Wayne, Ind., in 2007. Parkview Field has since been named the “No. 1 Ballpark Experience” in Minor League Baseball in three of the past four years.
Spirit Communications Park will anchor development at Columbia Common, the new gateway to Downtown Columbia. The 181-acre Columbia Common, under the guidance of master developer Hughes Development, is primed to become the ultimate live-work-play community in the region. 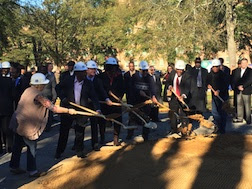 “We’ve seen this kind of development centered around a ballpark work throughout the country, including not so far away from Columbia,” said Bob Hughes, who led a similar project a decade ago around Fluor Field in Greenville. “Folks in Columbia are in for a treat with Spirit Communications Park.”
We can expect more than 900 jobs to be created during the construction of the ballpark. Once complete, Columbia’s professional baseball team will bring on approximately 35 full-time and 550 part-time employees.
This park would not be possible with out support from people like you; people who gave their time and energy to support Building Bull Street. Let’s play ball!

Want to advertise on bradwarthen.com?
Write to [email protected], or just CLICK HERE